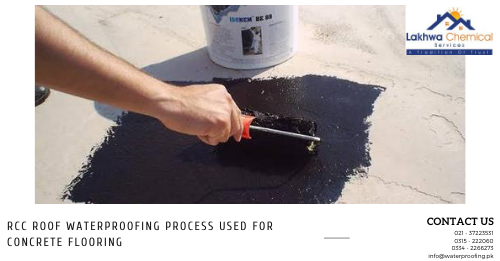 What is RCC roof waterproofing?

Urban construction often comprises of reinforced steel within their skeleton, which makes them endurable for various hardships of weather, strong wind, intense heat and even minor jolts of the earthquake. RCC although known as Reinforced Cement Concrete, which is used on roofs and foundation of various construction as they are in abundance, but like everything else, even RCC concrete has defects. One of which is the incapability of being waterproof. RCC roof waterproofing is an important process used to make it more adequate to endure rainwater or any other form of water pour without crossing into its composition. In this article, we are going to learn about some of the widely used chemical treatments that are quite popular in RCC roof waterproofing work. Let’s see what are they in details.

Before going into the details about what compounds are being used in RCC roof waterproofing in Pakistan, we need to understand the benefits and importance of it first. Unlike other components in a structure, roof holds the most points as being the vulnerable area where most of the water pours down, mostly due to rain, water tank leakage, or during pipe bursts events. If we talk about the industrial and commercial sector, the conditions are more in-depth and avid. If you happen to have the best concrete over RCC structure, no matter its an imported quality or not, concrete is not watertight, which means the liquid component will be absorbed inside the concrete, enabling it to show seepage and leakage after the excess amount of time.

Using RCC roof waterproofing chemical treatment, we can make sure every cracks or mold is properly repairs, and not just for repairs treatment, but you might find it quite useful as water-resistance concrete which helps to prevent an excessive amount of water being transferred inside your home. Either way, RCC roof waterproofing is quite the need of hours, in today’s concrete jungle in which we live in.

There are various methods used in the process of RCC roof waterproofing as an industrial standard. Below are some of the process used for concrete flooring.

Cementitious waterproofing is usually being used in the internal rooms not exposed to sunlight. It is easily available from masonry shops and being pours over wet areas such as the bathroom. Being a special type of concrete, this method is used during the construction of any structure, which makes it quite difficult if you need to pour down the chemical treatment on the go. Although effective as they come, Cementitious waterproofing can be used on every RCC concrete flooring as they can easily get situated from the material and makes sure no wet surface can get into the way of the floor once it’s all set up.

A more flexible type of RCC roof waterproofing method that can directly be used over the roof is called the liquid waterproofing membrane method. Made from polymer usually modified asphalt, the retaining prowess of waterproofing membrane is around 280% which is quite on the high side. The substances although made from simple elongation properties, but carries much more unique elements such as several primer coats for around two top coats that can be sprayed or either roller into the rooftop or simply used through trowel compound.

A very good waterproofing agent which is widely used on homes, commercial and industrial sector around the globe. Bituminous coating waterproofing is black in color and made from reinforced fiber element called asphalt. The coat not only protects from water leakages and seepage in concrete flooring and foundations but also increases the life of the structure. Although effective in nature, bituminous coating waterproofing is quite reactive with direct sunlight as an increase in heat can make it moist and fragile. For RCC roof waterproofing, the bituminous coating is accompanied by secondary more flexible material which has huge boiling point such as acrylic or polyurethane polymers which can sustain a high amount of heat from direct sunlight.

Best suited for RCC roofs either it’s flat or sloped, a bituminous membrane is compounds made up from asphalt, filler, and polymers, blow-torched as to join from the surface using self-adhesive mechanism. Unlike ordinary coat paint, the bituminous membrane can withstand harsh weather without any decrease in its performance. The RCC roof waterproofing contractor has to make sure that application of membrane is also accompanied with at least one protective layer at the top in order to protect the membrane from puncture.

Which is the best product for RCC roof waterproofing in Pakistan?

In Pakistan, around 95% of the roofs are made from concrete, or in other words RCC. As the raining and another form of water-based damage have taken a gigantic toll on the structural integrity of roof material, its pretty high time to ensure that proper care is ensured.

For the same purpose, it’s quite important to avail of the RCC roof waterproofing in Pakistan as it helps protect our roof for the better.

Let’s learn which is the best product for RCC roof waterproofing in Pakistan and believe us, there’s no substitute for waterproofing solutions when we are looking for a cost-effective solution and does a remarkable job as well.

With the mixture of cement, we can easily apply the solution as RCC roof waterproofing. It does two things being a concrete driven solution. One is helping to protect from the water-based damage for years to come, while another benefit is directed towards the double security for our RCC roof material.

Acrylic is a polymer that comes in transparent color. It tends to resist the water leakage and seepage over any material, although when mixed with white cement or normal cement, the solution can improve the water-resistivity from your roof area.

When things are putting you in a corner regarding rain-based leakage and seepage, which have led to other terrible and devastating damages across the board, its time to avail the extra protection through bitumen waterproofing.

This asphalt-based solution is the same chemical that is used over the road carpeting. For chemical solutions available in the market, the bitumen comes in two forms, hot and cold. The cold one is more popular as it’s the application that can be done more quickly, while the hot bitumen required more expertise and greater time for its application.

When everything else seems to be doing less benefit, because of all of these cracks all over your RCC roof, its time to hit two birds with one stone.

This can be possible in the form of availing a membrane-based solution as it’s applied over the RCC roof for years’ worth of protection.

Lakhwa Chemical Service is one of the leading waterproofing company in Karachi capable of providing a wide range of services, such as roof waterproofing, leakage treatment, and heat proofing services. We offer a unique blend of comprehensive professional services in a variety of fields, primarily focusing on the Residential , Industrial and Commercial sector.